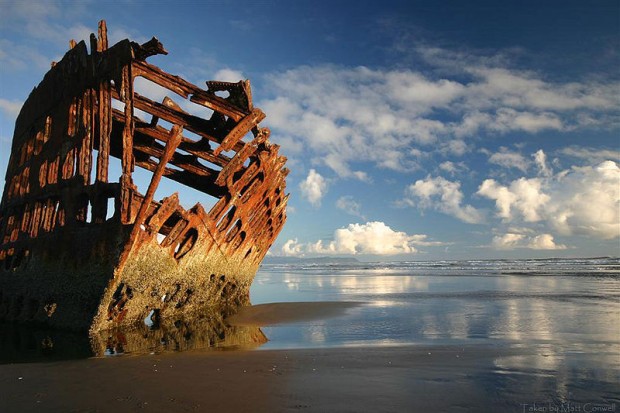 The wreck of the Peter Iredale

In October of 1906, during a thick mist and rising tide, the Peter Iredale, a shipping vessel named after its owner, was on its to Portland, from Salina Cruz, Mexico, hauling its cargo and two stowaways. They saw the Tillamook Rock Lighthouse, but not in time, and the fierce winds blew the ship ashore. Due to the help of a lifeboat from the town of Hammond, all aboard the ship were saved. The ship was sold as scrap, and all that today remains are a few ribs of the ship. Speaking to the Peter Iredale, Captain H. Lawrence said “May God bless you, and may your bones bleach in the sands.”

While little of the ship remains today, it is still a beautiful, wistful sight to behold. The wreck can be found on Clatsop Spit, at the mouth of the Columbia River, in Fort Stevens State Park.